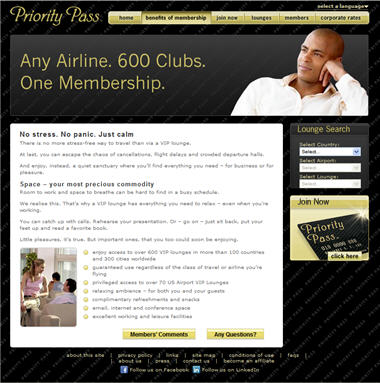 The Collinson Group, headquartered in the United Kingdom, provides services in the travel industry. Through seven independent business units, the company provides everything from travel planning software, to travel insurance and customer loyalty program management for travel industry principals. The organization employs more than 500 staff in 7 countries, and has customers in more than 120 countries around the world.

One of the business units, Priority Pass, is the world's largest independent airport lounge program, providing access to over 400 airport VIP lounges in over 220 cities worldwide. More than 500,000 subscribers belong to Priority Pass, and take advantage of the ability to utilize these lounges and associated benefits while traveling.

The Collinson Group had set up a website to enable Priority Pass members to access their accounts, and receive personalized information. Initially, a UK-based firm had developed an ASP website, and had built a rudimentary tool to enable updates to the site. However, as the company's site requirements became more complex (including increasingly sophisticated personalization), it became apparent that the custom tool was no longer sufficient.

Marco Tjong A Tjoe, General Manager of Travel Information Services (Netherlands), was charged with identifying a content management solution (CMS) that would enable the company to provide personalization without requiring complex customization of the software. The CMS also needed to be:

Tjong A Tjoe evaluated numerous ColdFusion based applications including Ektron, NQ Content and Spectra, but these products fell short of key requirements. Microsoft and Vignette were dismissed as too expensive, and not ColdFusion-based. Ultimately, PaperThin's CommonSpot was selected, as the solution best able to meet the company's requirements.

The development team, which included 4 developers, a project manager, and 2 site administrators, designed and developed the new site for Priority Pass in about three months, together with a designer in Singapore and database administrators in the UK. CommonSpot's template structure, and standard features like link bars, image grids and metadata, made it easy to build the site structure. The team utilized CommonSpot's add-on custom authentication capabilities in order to integrate with the existing member database. After an additional month of uploading content and testing, the site (www.prioritypass.com) went live.

The team also implemented CommonSpot custom elements, which allow for the easy re-use of content throughout the site. New members often sign up for the Priority Pass as a result of a promotional campaign offered by one of the company's partners. By using CommonSpot's custom elements and scheduling capabilities, the team could present different content based on which site the member linked from, in order to register for the program. Similarly, members can search the site to get news and updates about specific airport lounges in different regions around the world. Based on the query criteria, CommonSpot serves up targeted, personalized content consistent with the member's benefit level.

While the site is currently published entirely in English, Priority Pass members around the world speak many different languages, and the company expects to be rolling out content in different languages, utilizing CommonSpot's multi-language capability, in the near future. Non-technical contributors in the UK were trained by Tjong A Tjoe, and are now easily able to keep the content on the Priority Pass site fresh and personalized.

Following the successful launch of the Priority Pass site, the team was able to quickly build and roll out sister sites for two of its other business units, TravelPlan and ECI. These sites were up and running in just weeks, as the team was able to leverage many of CommonSpot's out-of-the-box features, together with the experience built from the first site.

While the team did not have specific ROI objectives outlined when it decided to seek a new CMS, several important advantages have been achieved as a result of the CommonSpot implementation.

First, the company no longer has to rely on tweaking a custom application built by a 3rd party in order to personalize site content. The process, which had been cumbersome and complicated, is now simple, and content can be easily maintained and modified by non-technical users. This saves time and consulting dollars. Additionally, as the responsibility for maintaining the various sites has now been distributed to non-technical contributors in the UK, the development team in Holland has been freed to focus on technical projects, while content is updated in a more timely manner.

Tjong A Tjoe added, "Overall, the team at PaperThin has been very helpful throughout the process of getting our sites launched. Unlike some other software vendors that we have dealt with, we clearly got the impression that your staff was attentive, and committed to work with us, to ensure we were successful."