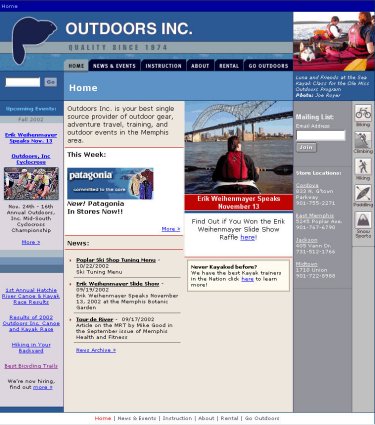 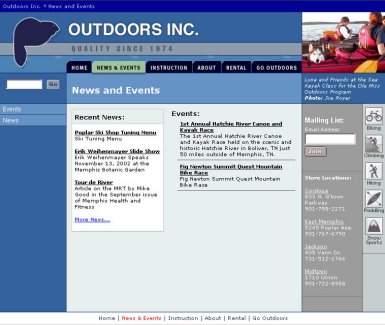 The Company
Outdoors, Inc. was founded in 1974 when Joe Royer and Lawrence Migliara combined their two paddling businesses, West Tennessee White Water Supply and South Central Canoe Base, into The Great Outdoors. Today, with retail locations in the Memphis, TN area, Outdoors Inc. provides Memphis and the Mid South with quality outdoor gear for the outdoor enthusiast.

The Problem
Outdoors, Inc. was an early adopter of the Internet, embracing e-commerce as the opportunity to reach beyond the immediate geographic area to attract outdoor enthusiasts from afar. Initially, the company engaged a local Web development firm to create a Web storefront, to facilitate e-commerce sales. However, the owners were soon frustrated by the fact that their staff could not maintain the site themselves. Simple updates to inventory, descriptions or other basic information had to be coordinated through the Web development firm. Consequently, making changes to the site was a time-consuming, expensive and slow process. This proved a considerable challenge, with competition mounting from major players such as REI and other national chains, who were also offering outdoor gear online. The owners knew they needed a better solution.

The Solution
After having worked with two different design and development firms to get their site online, the owners of Outdoors, Inc. were frustrated with their results on the Web. Since most of the employees are non-technical (spending more time paddling kyaks and mountain climbing than surfing the Web), the company was looking for a solution that would be easy for the staff to use. The owners also decided to orient the Web site around content, and de-emphasize e-commerce. After having explored selling online, the owners opted for a more strategic focus around education and community, and thus sought to increase the amount of content on the site about events, education and outdoor resources. The company also wanted the site to be dynamic, and offer a powerful search option, to make it easy for sports enthusiasts to locate content easily.

With this in mind, Outdoors, Inc. engaged Memphis-based Ringger Interactive to find a better solution. Based on the company’s objectives and resources, Ringger recommended PaperThin’s CommonSpot Content Server. Designed for end users, CommonSpot provides an intuitive interface for content contributors to easily enter and edit content for the site.

In less than six weeks, the team at Ringger developed the new Outdoors, Inc. Web site in CommonSpot. Prototypes were developed in Dreamweaver MX, and once approved, content pages were built in CommonSpot. Ringger deployed a number of CommonSpot’s standard features out of the box, including breadcrumbs, link bars and CommonSpot’s search mechanism, which leverages the Verity search engine. CommonSpot’s page index element was used extensively on the site, as a means to generate dynamic content on the fly. To make it easier for users to find information about specific sports, Ringger built a series of ‘activity portals’ on the home page, with links to sports such as paddling, hiking and snow sports. The Outdoors, Inc. site (www.outdoorsinc.com), which went live in the summer of 2002, is managed in a hosted environment.

The Return
The team at Outdoors Inc. has been extremely pleased with what they have been able to achieve with the new site. “CommonSpot raised the customer’s expectations of what is possible,” noted Paul Ringger, of Ringger Interactive. “The fact that they can update the site themselves, without having to rely on outside resources was a major accomplishment.”

According to Royer, “Our web site seeks to educate our customers about outdoor related news and events. This requires frequent updates. In order for the updates to be cost effective, we needed to be able to maintain the site in house. “ CommonSpot’s intuitive interface has allowed Outdoors, Inc. staff to do just that. Not having to pay consulting overhead for simple updates meant an immediate savings for the company, not to mention the benefit of more timely information. As an example, the team typically meets each Tuesday to decide what merchandise will be promoted that week. After that meeting, staff members can go right to the Web site to make changes immediately. So if, for example, they are putting Patagonia products on sale, that information can be live on the site in a matter of minutes, rather than having to call the consultant to make that change, saving time and money. Added Royer, “We couldn’t be more pleased with how easy CommonSpot is to use.”