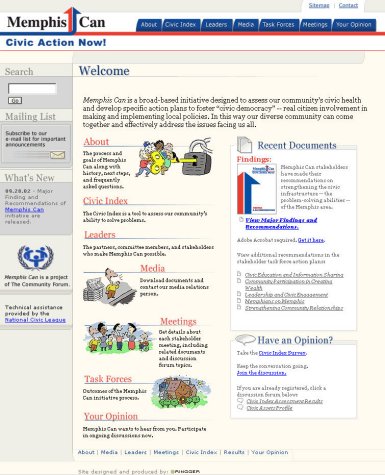 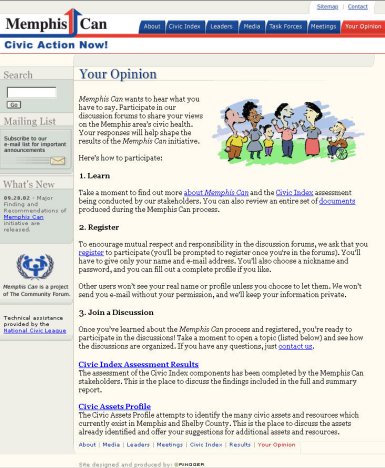 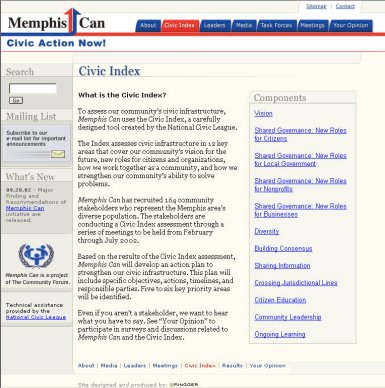 Rome wasn’t built in a day. But Memphis CAN and the Community Forum, two new community-oriented web sites for the Memphis, TN area, were in fact built in a week, using PaperThin’s CommonSpot™ Content Server.

The Community Forum is a non-profit organization dedicated to helping local citizens and groups respond to issues confronting Memphis and Shelby County, TN. The Forum approached Memphis-based web design and development consultant Ringger Interactive with a seemingly unachievable task – create and launch two dynamic websites in less than a week. Ringger knew immediately that their only solution would be CommonSpot.

“We could have built the site in straight HTML, but there would be no way for the customer to update the site once it was built,” commented Paul Ringger, President of Ringger. “Although the time frame was tight, the client needed a site that would be well constructed, and which they could administer and update on an ongoing basis.”

Although the team at The Community Forum had no prior experience with a content management system – they had previously maintained their site in Frontpage – they knew what content management features they needed. They wanted to allow non-technical users to easily add and update content, to dynamically generate frequently changing information, such as a listing of current events, and to provide moderated multi-topic discussions for registered users. Audiences for the two sites include the Citizens of Memphis and Shelby County, other non-profits, Governmental Agencies and participants and stakeholders in the Civic Index process. According to Nancy Record, Executive Director of the Community Forum, “Information on our site changes constantly, and we needed a way to update that ourselves, without relying on a developer or webmaster.” The Community Forum also wanted to be able to flexibly create future initiative sites, similar to Memphis Can, which launched at the same time as the Community Forum site.

Over the course of numerous consulting engagements, Ringger had evaluated several content management package solutions, and also had experience in developing home-grown solutions for customers. “To develop this type of rich functionality from scratch would take months, and even implementing a competing CMS package would take almost as long,” said Ringger. Ringger recognized that CommonSpot provided not only the breadth and depth of functionality required, at an affordable price, but could also be implemented very quickly. “We knew that the only way to meet the client’s deadline and budget and implement the features and functionality they wanted would be to build the site in CommonSpot. It was risky to commit to such a tight timetable, but we were confident that with CommonSpot, we could deliver.”

With CommonSpot, Ringger was able to design, implement and deliver two fully functioning sites (http://www.communityforum.info and http://www.memphiscan.info) to the customer in less than a week. In that time frame, Ringger mapped out navigation, designed a user interface and look and feel, created workflow and approval processes, uploaded all of the content to the sites, implemented a wide range of dynamic publishing features and coordinated hosting for the two sites. Ringger’s web team included a Project Manager/Technical Lead, an Information Architect / Editor / Writer, a Designer and a Developer.

After creating storyboards for the site design and navigation structure in Visio, the team set to work constructing the sites in CommonSpot. The team built an initial base template in Dreamweaver, and then created four templates in CommonSpot from which all of the pages on the two sites were derived. They also implemented CommonSpot’s simple forms to facilitate content contribution. “We locked down access to a limited set of functionality that the end user could modify, and implemented CommonSpot’s granular security and workflow process for updating the content,” Ringger added. The developers also deployed page index elements in order to generate dynamic lists of upcoming events, and utilized CommonSpot’s powerful capabilities to import and display PowerPoint and PDF documents on certain pages.

So has CommonSpot met the client’s objectives? According to record, ”Absolutely. We have been extremely pleased with how easy CommonSpot has been to use. As an example, we are now able to post meeting minutes on our site right after a meeting has occurred, and share them with a wide audience, who can provide immediate feedback through e-Zone Media’s FuseTalk™ discussion forums on our site. Consequently, we are able to create a much more effective interaction with our constituents, by providing them with both timely information and a practical, easy-to-use forum to respond. “ Added Ringger, “We were delighted to be able to achieve all of the client’s objectives for the site launches within budget and in record time. We could not have done it with out CommonSpot.”